Parties Who Are Jointly and Severally Liable on an Obligation May Be Sued in Separate Actions. [DKN Holdings, LLC, vs. Faerber (Cal.).]

The California Supreme Court has held that parties who are jointly and severally liable on a contractual obligation may be sued in separate actions. 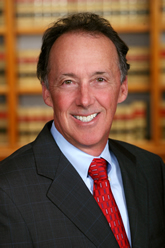 Facts: A landlord leased commercial space to three individual tenants, who were jointly and severally liable under the terms of the lease. After default, one tenant sued the landlord, which cross-complained against all three but soon dismissed two of them without prejudice. The landlord eventually obtained a large judgment against the first tenant. Just before that first judgment was entered, the landlord brought suit against the second and third tenants in a separate action.

The second tenant demurred on the ground that the landlord’s suit against them was barred under the doctrine of claim preclusion, since he had already obtained a judgment against the first tenant. The trial court sustained the demurrer without leave to amend and entered judgment in favor of both the second tenant and the third, who had defaulted.

The intermediate appellate court court affirmed, holding that since both of the landlord’s lawsuits had been based on the same “primary right,” i.e., the underlying leasehold obligation, the landlord’s first suit against the first tenant meant that the landlord could no longer bring suit against the second and third tenants. The California Supreme Court granted review.

Parties who are jointly and severally liable on a contract may be sued in separate actions. Judgment in the first action does not bar judgments in later actions, even when they allege the same claim of wrongdoing, as long as the suits are against different parties.

One of the tenants claimed that this rule was inefficient because it subjected the parties to multiple proceedings. The court rejected that policy argument:

This objection goes to the very nature of several liability, . . . and the Legislature implicitly rejected it in adopting the presumption that contractual obligations are joint and several . . . . [The tenant] is really insisting on a return to the old rule of joint liability, which held that contractual obligations had to be enforced in a single action. If an obligor could not be joined, because he was outside the court’s jurisdiction, for example, the plaintiff forfeited the right to recover against him . . . . [T]hese harsh consequences led to a liberalization of the rule.

Later, the tenant raised a different policy argument, claiming that serial actions against multiple defendants constituted a “divide and conquer” strategy, precluding the co-obligors from mounting a unified defense. The court also rejected that argument:

This concern is largely answered by the modern doctrine of issue preclusion . . . . [E]ven when multiple suits are permissible, the plaintiff may not relitigate issues decided against him in the first action, including issues related to damages . . . . Yet all defenses remain available to a co-obligor in a later suit, including those rejected in the first suit, because the co-obligor was not a party to the earlier proceeding and thus is not bound by it.

Author’s Comment: This decision restoring the status quo provides welcome relief not only for trial lawyers but also for transactional lawyers, since the intermediate appellate opinion appeared to overturn both well-settled transactional practices and litigation strategies. If this case had come out the other way, agreements would have had to be redrafted to include waivers of claim preclusion, and legislation probably would have been necessary.

Faithful readers of the Westlaw Commercial Finance Newsletter may recall that my discussion of the appellate opinion included the following statement: “Although the appellate panel that decided this case is quite distinguished, I nevertheless predict that the Supreme Court will grant a hearing and will reverse this decision . . . . ” (For the benefit of the record, let it be noted that I have erroneously predicted reversal in several other cases.)

For a discussion of the appellate opinion, see 2014-18 Comm. Fin. News. NL 36, When Co-Obligors are Jointly and Severally Liable, Creditor’s Judgment Against One Obligor Exonerates Non-Party Obligors Due to the Doctrine of Claim Preclusion.

[These materials were written by Dan Schechter, Professor of Law at Loyola Law School, Los Angeles, California. The opinions expressed herein are solely those of Professor Schechter.] 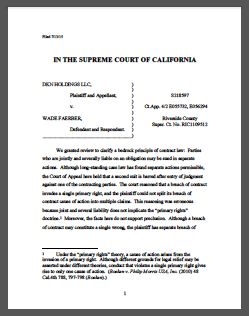